Skip to the content
Gonzaga University School of Education

This is the second part in a series featuring the value of a cohort-based approach to graduate education.

Dr. Elaine Radmer spent the last two years advising a group in Fernie, British Columbia. The Fernie cohort perfectly highlights the value of Gonzaga’s site-based approach. “All but one of the educators were from a single school district, but that district spans a number of communities,” Dr. Radmer wrote. “Geographically, they are spread along a single highway, but it takes almost two hours to travel between the outermost cities.” 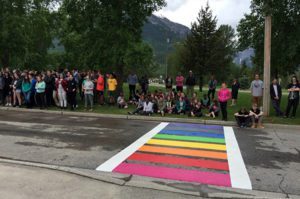 The Rainbow Crosswalk in Fernie. Shared from e-know.ca

Inspired to undertake additional project with students to improve their communities, Tara and Janet spearheaded the Rainbow Crosswalk project in Fernie, BC. In her role supervising the Student Council, Tara was able to mobilize the students. The project unfolded over months, as community experts came to school, students taught lessons to peers, and they presented to school and city boards. The project culminated with the painting of a crosswalk by the high school and four additional crosswalks in the downtown area to promote inclusion. Local media covered the project:

Check out our first post in the series: Alumni in Action: The Elk Valley Arch

Alumni, Faculty, In The News