If you watched Gonzaga basketball at the start of the 21st century, you might remember one specific cheerleader who always yelled “woo-hoo” to the crowd during basketball games. He was such a central part of games that as people on the street, at Safeway and even in church recognized him, they would yell back: “woo-hoo!”

Practically famous for his cheerleading style at Gonzaga, Patrick Mulick (’03, ’04) is now best known for his work as an autism specialist and inspirational and instructional speaker. As a multi-talented professional, Mulick is making an impact on the lives of students and educators alike. Mulick calls upon his experiences and education from Gonzaga, attributing much of his success to being a Zag. 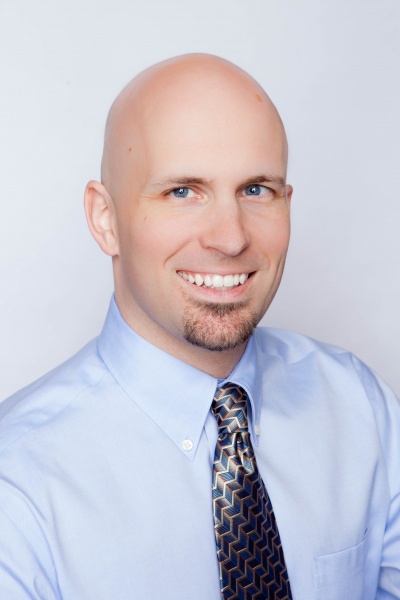 At a young age, Mulick knew that he wanted to be involved with teaching. Soon after coming to Gonzaga, he realized that his place was with kids, and specifically, being a voice for kids with disabilities. After his first jobs teaching preschool at an alternative behavior program in Spokane, Mulick moved to the west side of Washington, where he took a position as a high school special education teacher in the Auburn School District. Little did he know that he was on the path to changing people’s lives.

In a classroom of students facing challenges such as Down’s syndrome and autism, Mulick and his two para-educators taught valuable life skills – how to communicate, how to manage frustration, how to manage money, how to follow a daily schedule and how to apply for jobs.

While teaching, Mulick decided that in order to further his opportunities as an educator, he would need to become a National Board Certified Teacher. Though the process was very rigorous and long, he earned his certification. In addition, he became a Board Certified Behavioral Analyst, a less-demanding process thanks to his master’s classes, which he considered a “hidden gift from Gonzaga.”

The many years of being an on-call resource for teachers and the additional certifications led Mulick to his dream job – Autism Coordinator in the Auburn School District. As Autism Coordinator, Mulick recommends realistic research-based interventions to educators that will bring about changes for their behaviorally challenged students. “Though I am sometimes challenged by finding the right recommendations for teachers, it’s adventurous at the same time.”

According to Mulick, one in 68 kids is diagnosed with autism every year. “There’s such a need to educate children with behavioral challenges,” he comments. “We’re not doing these kids right if we aren’t providing them with the proper support.”

Mulick extended his passion through inspirational messages to special education teachers throughout the district and then to neighboring districts and then schools and conferences all over the country.

As a cheerleader at Gonzaga for four years, Mulick had mastered the ability to be before large crowds and influence the environment. He had seen the impact sports fans could have on the players on the basketball court, so those memories have naturally formed analogies for education and the workplace: people can create positive change through their attitude and support of those around them. “Your attitude is like glitter – good or bad, once it’s somewhere, it’s everywhere,” he says.

Mulick’s message comes to life when he puts the audience in the position of students with special needs. It is the eye-opener participants need to connect more strongly to the research-based interventions he presents. Mulick wants educators to understand why research-based interventions are effective, as well as reminding them why they became an educator in the first place. Educators work with the most precious resources within the community on a daily basis – our youth. “Sometimes it can be overwhelming,” Mulick comments. “I like to remind people that they get to empower kids on a daily basis.”

Mulick is still a full-time educator – and a dad – with 20 speaking engagements scheduled so far this year, as close as Seattle and as far away as Pennsylvania. Some may call the time and effort Mulick puts into his speaking a sacrifice. In actuality, Mulick says it fills his cup to have the opportunity to interact with people in the way he does.

Patrick Mulick (center) with a group of employees from Issaquah (WA) Transportation, where he provided training

Mulick says one of the biggest takeaways from his Gonzaga experience is understanding servant leadership. It’s this mindset that puts him in the humble servant seat, helping him to grow and learn even more from others.

“As much as I enjoy getting up on stage and engaging with people, it’s about what we as educators are doing for the kids,” Mulick says. “It’s all about making a difference for the kids.”