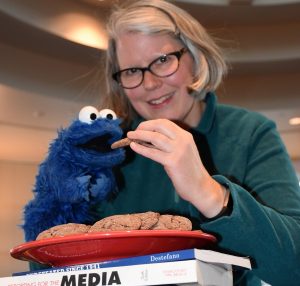 Christmas cookies. What every college student longs for during the holidays … and especially during finals week.

It was last Christmas that Foley Circulation Assistant and Reserves Specialist Molly McFadden unearthed the Cookie Monster puppet that had brightened her youth back home in Alaska on those long winter days with only a glimmer of daylight. It had followed mom and pop from Molly’s childhood home in Alaska to Spokane. Her work-study students, and a few colleagues, who work with Molly in the library, have enjoyed playing with Cookie Monster over this past year. But this isn’t a story about a Cookie Monster . . .  it’s about Cookie McFadden.

She moved here when she was 14, which was a particularly snowy winter in Spokane. But it seemed like nothing unusual having grown up in Alaska. She received her undergraduate degrees – English and history – here, and her master’s in library science at University of Illinois. She returned to Spokane in 1991 and accepted a job at Gonzaga, some 26 years ago. “I was a little miffed Gonzaga waited until I graduated to build a new library, which we moved into in 1992. Under construction when I arrived, we had to climb a ladder to see what the second floor was going to look like,” McFadden remembers.

I want to make sure everyone can enjoy a cookie during finals.”
Molly McFadden

Around the turn of the century, Foley started hosting a Christmas party in its Rare Book Room. “We all made a batch of cookies for the event, but I was always afraid we’d run out, so I made more. What was left went to our student workers, and it seemed to lift their spirits. Now I make cookies for finals in the spring term, as well,” McFadden says. 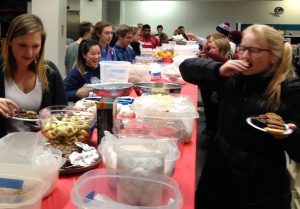 But not just a batch or two . . . dozens. She makes gluten free, dairy-free, without nuts or eggs. “I want to make sure everyone can enjoy a cookie during finals,” Cookie McFadden says.

She now makes about 60 varieties over the course of a year. Asked what her best cookie is, she says it depends on what she’s feeling like eating on a given day. “Mint chocolate snaps are pretty good, but sometimes I want chocolate and sometimes oatmeal.”

Regardless of the flavor, a Christmas cookie always seems to lift the spirits of her student workers. “And I think that spirit comes from more than just basketball success this time of year,” the cookie maiden says with a smile. 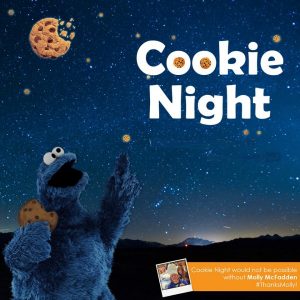