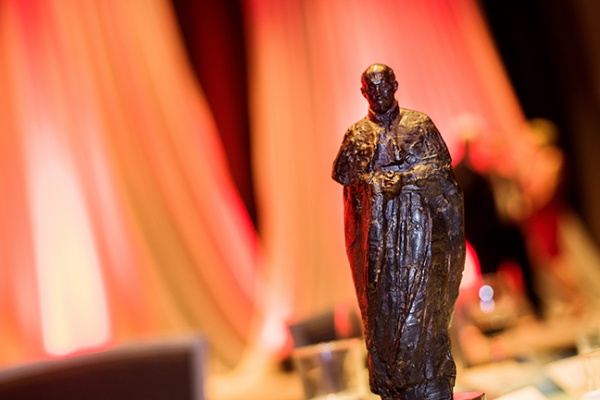 On April 14, 2016, Gonzaga University honored Gerri Craves and her late husband Bob with the Ignatian Spirit Award.  Bob and Gerri have demonstrated a lifelong dedication to service of others through education. They played a role in helping to educate thousands of students from low-income households (many first-generation college students) through the College Success Foundation. Gerri has served on both the Gonzaga Board of Trustees and Board of Regents and has been a champion for students and Jesuits.

Here, we learn more from Gerri directly about what drives her.

You have often said, “I’m here to serve God … and my Jesuits.”  When did your deep connection to the Jesuits begin?
I was in a foster home.  There were three of us and I was the only girl.  Father P.J. Carroll was the uncle of the Murphy family where I lived, and “Uncle Joe” always thought he (Fr. Carroll) should have an extra arm for me since I didn’t have a dad. That began the love affair with the Jesuits.

What happened when you left that environment?
I went to college, and I worked to put myself through nursing school.  I loved to travel, so I saved money to take occasional trips to Europe.  Then I met Bob on a blind date.

Bob originally thought he might want to go into the priesthood. Did you have anything to do with changing his mind on that?
No, no.  Back then, boys started seminary in the eighth grade, so he had several years in that environment.  He found he had no trouble with the vows of poverty and chastity, but he didn’t do well with [the vow to] obedience!

You were working as a hospital nurse in California, but you didn’t continue nursing when you two moved to Washington.  What happened?
I interviewed at Children’s Hospital in Seattle and after working several years in nursing, I would be back at the bottom of the totem pole, working nights. I didn’t want to do that and when I told Bob, he said maybe I should work for him.  He had started a new company and wasn’t finding the young people he wanted to work for him, so he asked me to handle the marketing, which he referred to as “street walking!” What he meant was that I would go out from business to business promoting this new thing he was bringing to the region.

And what was that new thing?
Costco. When he told me his idea to have a place where people could buy groceries and tires and diamond rings all in one spot, I said it would never work.  But he knew what he was doing. He said, “Look at these people in the Northwest: they want quality and we’re going to make it easy for them to get it.” 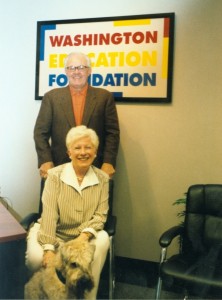 You found your own niche apart from the development of Costco. Tell us about that.
When my daughter had an opportunity to choose her high school education, she chose Seattle Prep, and that was really my next window back into the work of the Jesuits. They asked me to serve on the school board, then to chair the capital campaign.

I guess word travels quickly in Jesuit circles, as then I was asked to become a regent at Gonzaga.  I did not know this school or its campus, but Father Paul Fitterer showed me around and I loved the people and the community. I became a Regent and I’d fly over alone and didn’t know anyone but people always welcomed me and I always felt like there were arms around me. Two years later I was asked to go on the Board of Trustees. That was 16 years ago.

Trustees are asked to select an area of focus for their work at the University. What did you choose?
My two loves are Jesuits and students. I worked on the student life committee, and the creation of a new student center was a huge dream of mine, emphasizing that now it was time to build a really great place for students, which now we have, thanks to John Hemmingson.

Board members also saw my developments in fundraising, so I chaired the development committee for several years and I’m currently on the cabinet for the capital campaign.

Part of the campaign focuses on a new Jesuit residence. How do you respond to people who are concerned that the decreasing presence of Jesuits on campus threatens our Jesuit identity?
It’s up to all of us to keep it Jesuit. It falls on all of us to carry that banner. Holding the Jesuit community high is a course our students need to learn, to carry out that mission for future generations. 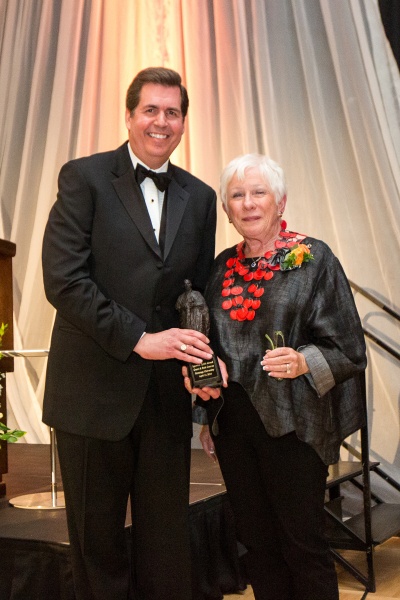 to this community of men we admire and love and respect, and committed to a vision of bringing other Jesuits here. I’m hoping others will take their sabbatical here. Or study here. How’s the saying go?  “If we build it, they will come.” We believe that about the Jesuit center. We will attract the best and the brightest who will be eager to be here.

You’ve openly expressed your support for President McCulloh. What do you want people to know about Thayne?
Everybody loves this president. I knew him when he was serving in financial aid, and saw how much he understood compassion. It was really important to me, and others, when we were one of the first Jesuit schools to go out on a limb to hire a lay president – I would do everything in my power to make it a success. Here’s the deal: Thayne’s a Jesuit, just without the collar. It’s not that he has the lingo and the buzz words – he has the mind and the heart of a Jesuit. 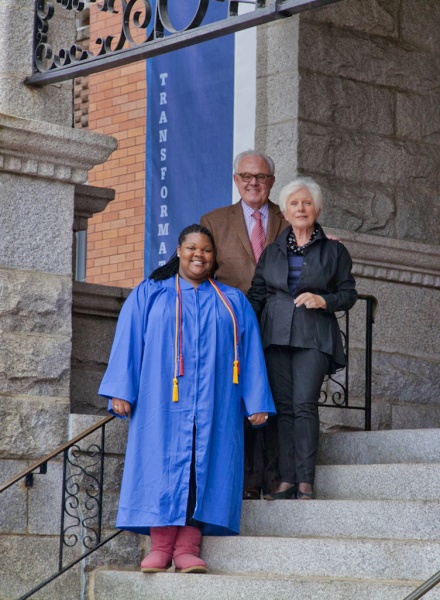 Through the College Success Foundation you and Bob helped provide a college education to students who wouldn’t normally have the chance, and you referred many of them to Gonzaga. Why was that?

What Gonzaga gave my kids was mentors – people to support them. Sometimes the mentor was a secretary or a computer person – it didn’t matter. What mattered was that someone would make sure these kids never fell through the cracks. I learned alongside these kids what being disadvantaged meant. Some of them arrived on campus with their belongings in a Safeway bag instead of a suitcase.  Their mentors offered them dignity. Where other students from more affluent homes seemed to have a strong social network, these kids often didn’t experience that. The mentors were crucial to their success. We’ve had at least 40 graduate from GU, and only one who didn’t finish.

Gonzaga never failed me in caring for these students.

What is your hope for Gonzaga’s future?
We have to continue to focus on the poor. We have an obligation to find the people with the greatest need and give them the opportunity for an education and then send them back out to do likewise.

Tell us more about Gerri. What makes you tick?
I have wonderful friends, two beautiful children and two beautiful grandchildren. My family is fabulous, and my community in Seattle. I love to read and I love theater.

I lost my sight four years ago, so now I listen to books on tape, have a computer that talks to me and a magnificently large screen. My goal is to stay in the game. I do everything I can not to drop out of life because of this disability. So, I rely on a lot on strangers – and that’s a gift. God’s idea was to help Gerri be more humble, so I’ve learned humility.

I can’t drive anymore, but I still like the notion of putting my gear shift into drive. I don’t want neutral or park, and never reverse.