In a hut in the desert I was alone. If I spoke to myself, breaking into the silence, it sounded loud and unwarranted.

Two weeks later, in a dimly lit room – a converted cow shed – the silence was tightly localized. On either side of me sat Nepalese men, speaking quickly. I remained silent. The sounds of food cooking over the heat of a wood fire filtered out of the adjoining room, rain fell outside.

Silence, I’ve found, is an absence from myself. Not knowing the language and not sharing a culture, I’ve found myself slowly stripped of my normal identity; an identity that is so largely based on my daily routine.

In addition to the obvious definition of silence, Merriam Webster defines it as “absence of mention.” This absence of mention is the common thread I’ve found between being alone in the desert and traveling in a country of 31.5 million people living in a space slightly larger than Arkansas. In both settings I’ve ceased to exist in the ways to which I’m accustomed.

Early this summer, I spent seven days in a silent meditation retreat in the Arizona desert. From there I flew to Nepal, a loud country by all auditory measures, yet for me still silent.

I arrived in Nepal on June 14. Four days later I left on a planned 18-day trip into some of the more remote areas of the country. The trip served dual purposes. First and foremost, I was documenting work done by a nonprofit based out of Spokane for the Spokesman Review, my employer. Second, it was for enjoyment.

Within a day I realized I might need to reframe my definition of enjoyment. I was involved in something quite challenging. Although the hiking itself was not so bad, what was difficult, more so than expected, was being in a completely unfamiliar context.

For most of the trek we stayed in people’s homes. They were overwhelmingly kind and treated me like royalty. Still, I felt deeply uncomfortable, partially due to the lack of certain amenities I’m used to.

But, the hardest part wasn’t the bugs, or the beds, or the bacteria. The hardest part was the silence and the loosening effect it had on my identity. It was the same feeling I’d had during the meditation retreat, a gradual absence of myself, or at least of the self defined by habit and routine. 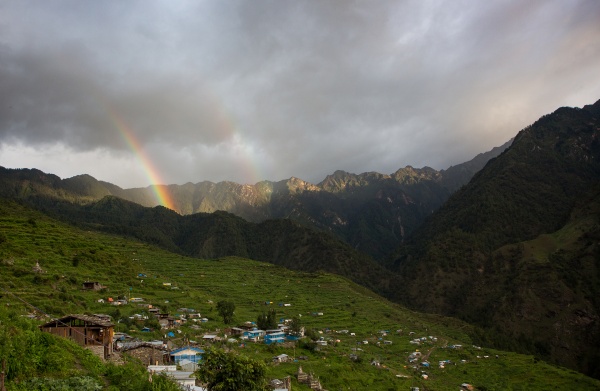 I’ve traveled before so I’m not unfamiliar with this process. Spending time in other countries, particularly “developing” countries pushes your sense of selfhood. If you allow it, traveling will bend the edges of your being.

However, every other time I’ve traveled I’ve been with someone, mostly my brother. At the end of a day I could decompress with someone who shared my language, culture and general orientation toward the world. Our conversations reinforced our identities, bolstering each other up in the face of so much difference.

Alone, I didn’t have that. At the end of the day I was left with me, my body and my mind, nothing added – no books or phone. None of the normal distractions. And that’s where the work happened. It’s not fun, necessarily, and it’s certainly not comfortable. It can even be scary.

At times during the meditation retreat I felt like a bug trapped under a glass, trapped with myself. The same feeling arose on my Nepalese trek; I wanted desperately to escape, to immerse myself in my normal habits and routines.

After a particularly difficult day, I broke down and asked my guide, and eventual friend, Pradeep, if we could get a bus back to Kathmandu. All of my daydreaming about calling my family, coffee – my fantasies of showers – they overcame me.  I was surrendering. I wanted back into my own habits and preferences. I wanted the noise of normalcy to distract me, to overwhelm the silence.

Pradeep, who was in the process of killing three scorpions we’d found in our room (it took, on average, three solid hits to kill one scorpion), shook his head. Not possible. The roads were too bad. As much as I wanted to escape, I couldn’t.

The only way forward was to stay in the experience, no matter how uncomfortable that might become. And as soon as I knew there was no escape, I started to accept the situation. The night passed uneventfully, I slept heavily. And the next day began.

I stuck with the experience, through no effort of my own, and I was rewarded.

By being absent from myself, if even for only a short time, the rigid boundaries of my identity have begun to soften. And as those boundaries blur I’m better able to see the world from others’ perspectives, my capacity for empathy has increased.

On the second to last day of the trek I sat with Pradeep on a hillside. We spoke about his family and my family. We talked about our different experiences of school and the likely trajectory of our lives. The conversation’s content wasn’t profound, but the entire exchange was infused with a sweetness and intimacy I’ve rarely found outside my immediate family.

I listened to Pradeep without distraction. I wasn’t thinking about the next thing, or what was happening on my phone. And I was sharing with him things about myself I wouldn’t normally share with a near stranger.

It was a clear evening, a rare thing in Nepal during the monsoon, the landscape thrown into sharp relief by the length of the fading light. The rain had washed the clouds away, uncovering the beauty of the hills – hills that faded endlessly into the distance, their steep slopes blurring together.

By loosening my conception of self, no matter how briefly, I’ve discovered a delightful clarity of being, a focus unobstructed by the habits of everyday life. In the silence I continue to discover a clearer more vivid version of me.

About the Author
After traveling in Northern India for a month, Eli Francovich (’15) spent a month in Europe before returning to Spokane where he writes for The Spokesman-Review. Eli is also a former contributor to Gonzaga Magazine.