The year was 1974 and Spokane was hosting a world’s fair less than a mile from campus. Back along Boone Street, Gonzaga was in search of a new president during very difficult times.

Then chair of the Board of Trustees, Harry Magnuson, along with University President Father Richard Twohy, S.J., invited the dean of Social Welfare at St. Louis University, Father Bernard (burr-nerd) J. Coughlin, S.J., to campus and offered him the 23rd presidency of the University.

It wasn’t until Fr. Coughlin had moved his meager belongings to Spokane that Harry dropped the bomb: “By the way, Father, we’re broke.” 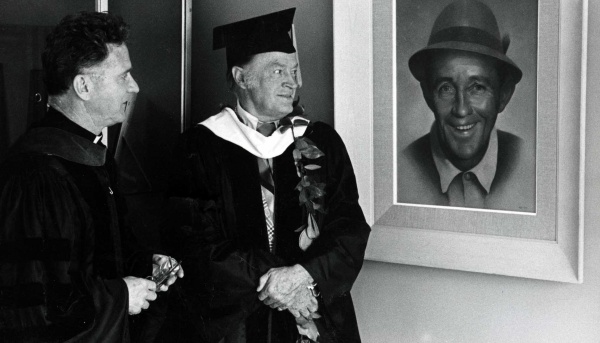 Fr. Coughlin knew that the only way to dig out of debt was to meet, build relationships with, and engage business and civic leaders in promoting a vision and mission for a strong, morals-based university. With their business acumen and resources, they helped right the ship. One only needs to stroll across campus to see the names of Fr. Coughlin’s many friends on our buildings, rooms and scholarships – Kennedy, Tilford, Jundt, Jepson, Burch, Herak, Magnuson, Foley, Cowles, Rosauer, McCarthey, Clute, West, and soon-to-be Woldson – to name a few.

“Finances were very problematic,” Fr. Coughlin recalls. “So I began doing what I thought was the right thing to do, and not everybody liked it. As time went on, a band of people came forward and helped me – many of them – for which I am very thankful. I was fortunate to establish wonderful relationships.

I believed then, and still do, that the president’s job was to engage people who had thoughtfulness and generosity and wanted to see the University succeed

And in time, Gonzaga became very much a part of this community. It was a happy place. Over the years, it has developed into an extremely powerful University, with wonderful people, wonderful students, and a wonderful set of values the people who worked here incorporated into their own lives and into the life of the University.” 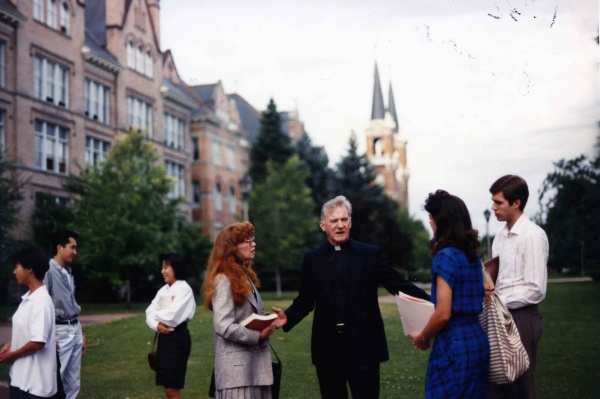 Students have always been the heart of the university to Fr. Coughlin. Here, back in 1988, he chats with, among others, current University President Thayne McCulloh, right.

It would be impossible to count the people who call Barney Coughlin their best friend.

Brooks Fields, a former Gonzaga Trustee, now deceased, was one of them. He always wondered how a college president could have such an “awkward name. You ought to get rid of that name. That’s a name for a dog, not a college president.” But it always drew a laugh from “Barney,” who had no intention of changing his name.

This man of great stature and abiding care for people had both bark and brawn in higher education leadership circles. But at home on campus, cura personalis, care for the individual, exemplifies everything good about the man who saved Gonzaga University, preserved Gonzaga’s Jesuit heritage and continues to share his love with so many colleagues, students, friends, alumni and associates.

Fr. Coughlin is the longest serving president in University history, 22 years, from 1974-1996. He has served as Gonzaga’s first and only chancellor for the past 20 years. “I guess I have felt so involved that I never realized that I have been at Gonzaga for 42 years. That’s almost half of my life,” he says, a slight smile creeping over his face, which is etched by both trials and great accomplishments.

It is near impossible for people to visit with Fr. Coughlin and not leave with a smile in their heart and on their face. His graciousness, and joy for life and the Lord, are downright contagious. 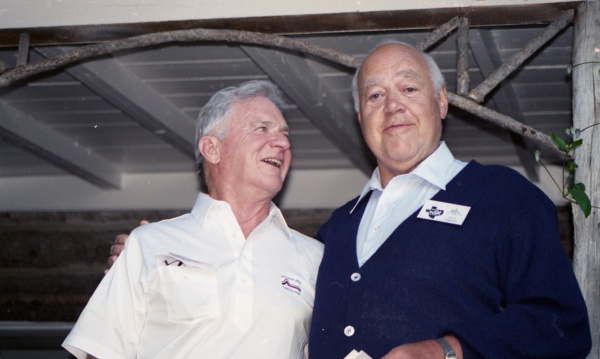 It was Harry Magnuson, the first lay chair of Gonzaga’s Board of Trustees and North Idaho mining magnate, who brought Fr. Coughlin to campus for an interview in 1974.

Turning 94 years old on Dec. 7, he still gets out to walk the campus whenever he can. And it’s not uncommon to see him stop and strike up a conversation with a student. Being active is something that has always made him feel good. “I appreciate the students coming up and introducing themselves and establishing those associations with me,” he says. “It’s good for the students to feel at home, and I enjoy seeing their smiling faces.”

Students are one primary cog that makes Gonzaga such a fine place, Fr. Coughlin says. “I’m not trying to put any gold on my shoulders for making it a fine place, but our students want to be good scholars, get a good education and succeed in life (not just in the job market); their values and the quality of what they are doing, the families that they’re raising, the things they are teaching, are in keeping with Gonzaga’s values as a Jesuit university. To me, that’s a very important thing.”

His accomplishments many, he has remained a very humble man. “Right after I became chancellor, I was at a luncheon hosted by my wonderful friend Kerm Rudolf (former corporation counsel). In the middle of our conversations, Kerm says, ‘Father, could you tell us what a chancellor is?’ That was an easy one for me to answer. I said, ‘Kerm, a chancellor is just a worn out president.’”

But there has never been anything ‘worn out’ about this Irish Texan, who always draws his humor and his search for truth from his Irish heritage, and his toughness in doing what’s right even if unpopular from his years growing up in Texas. 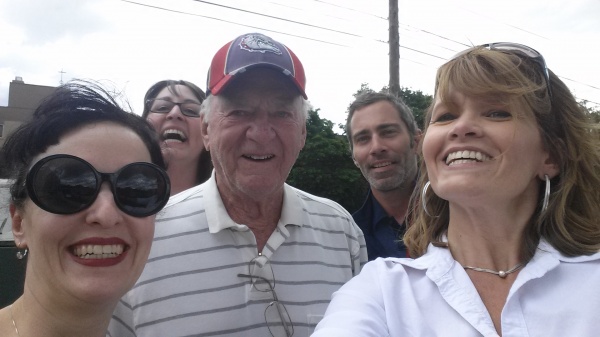 Fr. Coughlin has always enjoyed a chat with colleagues on his daily walks around campus.

The best advice he ever received was quite simple: Do what’s right. And if he could change anything to make the world a better place, he would place more attention on early education – first, second, third grade – teaching right from wrong, good from bad, doing what’s just, seeking truth in all things.

Perhaps Father’s most poignant moment in his storied career at Gonzaga was on a visit to a local hospital to see his friend, Harry Magnuson, who was so instrumental in supporting Fr. Coughlin in his early days as president.

“He reached out and took my hand. He said ‘Father (he always called me Father), it’s all about love. It is ALL about love.’ I’d never seen this side of the man.

“It meant so much to me to hear him say those words. ‘It’s all about love.’ As St. John said, ‘God is love, and whoever abides in love abides in God, and God abides in him.’ As it turns out, it was Harry’s final day on Earth.”

Fr. Coughlin knew exactly what Harry was saying, for in his soul, Fr. Coughlin himself is all about love.