Jeffrey G. Dodd
Assistant Professor of English
Director of the Center for Teaching and Advising

In March 2017, Jeff Dodd accompanied 12 students on a Mission:Possible immersion trip to Neah Bay, Washington – a small town on the Makah Reservation, located on the Olympic Peninsula. There, the group learned about the realities of reservation life and efforts to preserve the local history. Here are some of their stories.

If the world is built on tales, then here is a starting point:

I am walking back to their classroom at Neah Bay Elementary with Janice and Jessie after recess. A dozen Zags and I spent the mornings each day during Spring Break assisting teachers and staff at this public school on the Makah Indian Reservation. Janice mentions a brother and I ask about her family.

“To the beginning?” I’ve caught her point.

“Yes.” She has had her say, and I don’t hear her voice again that day.

Here is a starting point to a world built on tales: Nina, Madeline and I are at the Makah Cultural and Research Center. 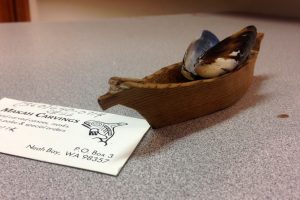 Her office is floor-to-rafters with boxes of records and relics representing the history of Neah Bay and the surrounding area. Our first work is to create an index of several albums of projection slides taken during the Ozette site’s initial exploratory excavations in the 1960s.

“Colby Box 1” contains three photo albums that comprise a record of several generations of the Colby family. Some of the pages’ cells are crammed with four and five small photographs, all taken between the 1870s and 1920s. So, our day suddenly takes the form of indexing, of creating a tool for accessing and exploring a family’s—and by extension its community’s—history.

The world is built of tales, and the point of it all starts here, in a large fireside room at Makah Lutheran Church, our hosts for the week. 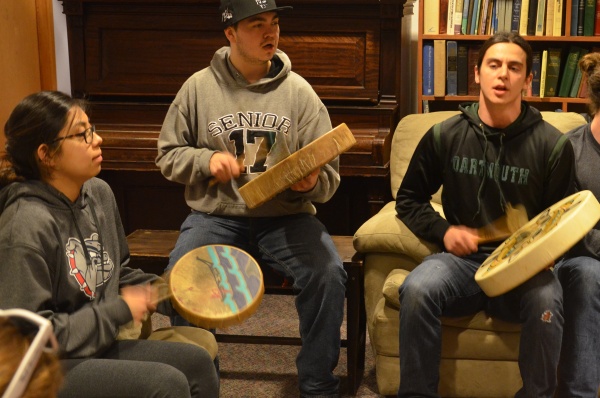 Josh Monette (right) had dreams of saving the Makah language

Josh Monette has joined. We’ve spent time with him at the museum, where he is working during a break from his studies at Dartmouth, and he is as striking for his humility as he is for his aspiration. Josh tells us that his goal is to preserve his culture by becoming the only fluent speaker of its language under 30. The soul of a culture is found in its language, and Josh sees his legacy as being the last hope for keeping that language alive. A woman named Maria, who teaches at the high school and is one of the few facile speakers of the Makah language, has joined us. The pair has come to teach us “the bone game,” a traditional Makah guessing game in which teams face off to guess which hand holds a specially marked bone. Members of each team engage in diversionary tactics to confuse the guesser, and drum-beat musical taunts fill the room as the constant rain continues to fall outside.

Josh explains that skilled players go for hours, even straight through the night, at the tribe’s major gatherings and fêtes. Josh’s description of the bone game emphasizes time spent together, on song and celebration, cunning and community. I know that when I return to Spokane, to my work on campus and to my busy two young children, there will be precious little time for joy this easy.

In this world built on tales, a starting point is Keith and Arnie, leaders of the Makah Whaling Commission.

Here in our dining room, they explain the tribe’s decision in 1999 to conduct its first traditional whale hunt in over 70 years. Keith describes traditional and social structures based on endogamous castes, in which families and social divisions take shape around occupation. They make a compelling, casual, and complicated argument for the tribe’s right to practice a traditional ritual.

Later, at the fireside, we spend two hours trying to process issues of sovereignty and empire, of a peoples’ right to pursue a tradition explicitly granted by treaty, of the complex environmental and ethical issues in whaling, of the challenging and mysterious gender roles involved in the hunt, and the emotional responses some us had to watching a video of a gray whale being harvested and later butchered.

Perhaps the thing I value most about the work of immersion and accompaniment is that it helps us work those muscles that root us to our place in the world. Not because we retreat further into our own identity but because we begin to clarify how we might live in relationship to others who aren’t like us.

The world is built on tales, and because of that we start here, at Froyo Earth near Gonzaga, on a Friday evening two weeks after our return from Neah Bay. 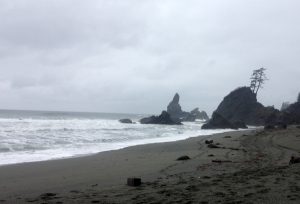 We’d been gone just eight days when our leader, Louis McCoy, used the group text: “I just got some pretty heavy news. Josh Monette has been missing since 1pm yesterday. He was on the shore collecting seafood and was taken by a wave.” And the next day, “I found out this afternoon that the search for Josh was called off.”

This is not Louis’s first experience with the death of a young peer, and he’s extremely attentive to supporting people in their various modes of grief. So we are here, comparing our yogurt toppings, sharing our shallow pool of memories from our time with Josh, and writing notes of condolence to his family. It’s a truism that any young death is an assault on our future, that the loss seems compounded simply because the potential can’t be measured. Josh Monette, a once-future Makah elder, now a Makah ancestor, is a perfect case of this. The soul of a culture may be found in its language, and he was going to be the voice through which that soul spoke into the future.

As a teacher at Gonzaga for a decade, and as a father, I would be lying to you and myself if I said that Josh’s death didn’t make me reflect on the students I’ve lost here, and the losses I know will come.

If the world is built of tales, then one last starting point is here, in this kitchen where six of us talk for hours while an oven heats the living memory from our dinner.

I hear about students’ struggles to balance all the moving pieces in their lives. About the tensions of managing parental expectations, worries about their future, and the self-imposed stress that successful students often carry. About their “Zag moment” and their deepest regret and their gripes with the University and their hidden talents.

In now six years of advising Mission:Possible groups, easily 75% of my memories take place in a kitchen, with students and members of the communities they’ve served, learning what makes them work so hard, and about the passions and compassions that shape their aspirations for a better world, and these moments consistently remind of the human dimensions of our work as teachers and professional staff. We are not first teaching classes or delivering and assessing programs. We are working with people whose potential is yet unmeasured, who will see the soul of our future take flight, many of whom are finding their place in the order of things.

I am reminded of this as we laugh and pause, as we tuck-in to our chicken and potatoes. This trip is as much about learning to live intentionally in our own community as it is about serving another. 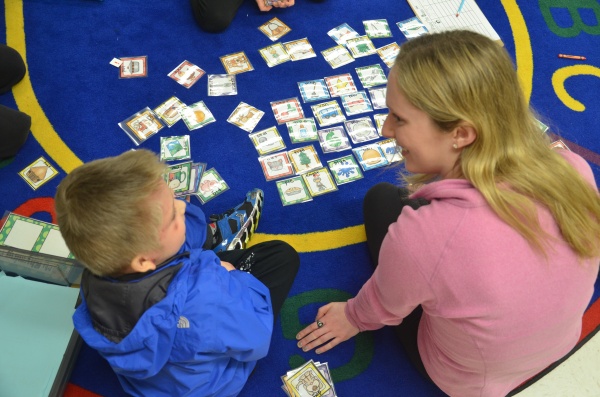