The climax of a good film should encapsulate the movie, wrap up its themes and emotions, and deliver them to you on a platter of cinematic glory. I’m not sure how glorious it was, but my role as student commencement speaker was the climax of my college experience.

During winter break after my first semester at Gonzaga, I had a crisis. My nebulous dreams of being a medically trained political scientist who dabbled in linguistics plummeted into oblivion along with my Chemistry 101 grade.

Laying on the living room floor, arms by my sides, face buried in the rug, wondering why, after three months of college I didn’t have all the answers, my dad leaned into the room and said, “Jess, why don’t you just study what you’re passionate about?”

Great Scott. That’s the ticket. After doing some soul searching, I had a list of about 13 unrelated “passions.” While a testament to my well roundedness, the list only exacerbated my problem. I consolidated the list into top two choices. In first place: movies. In second place: the rest of the list. There was my answer. If I went into broadcasting, and eventually film, I could pursue any topic, or subject, or story that looked interesting until my hands were too old to hold a camera up. And by then, I should be able afford a lackey. I’m only kidding: I’ll use an apprentice — they work for free!

My transcript from Gonzaga says I majored in Broadcasting and electronic media with a minor in Theatre Arts. In pursuit of these, I actually learned about thermodynamics, phosphate pollution, interpersonal development, Magic: The Gathering (a role playing card game), longing, modern dance, the Watergate scandal, teenage pregnancy, justice, religion, how to talk to people and most importantly, how to tell stories.

When I was chosen as the student commencement speaker, I thought, OK, this is it. I will give the most earth-shaking, mind-exploding speech ever given at a graduation ceremony.  Two weeks later, I’m sure my parents have forgotten the contents of my speech, as have almost all of the students. Perhaps my love of films set me up for a bit of a personal disappointment when I was unable to materialize orchestral accompaniment using only my words. I was hoping for a strings section at least. (Thayne, is that in the budget?) 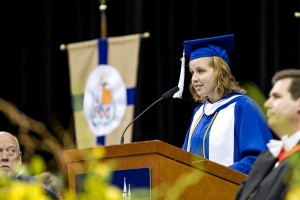 The strings would have been entirely inappropriate for this narrative climax of my Gonzaga experience. Not only because my thematic music involves more tubas and kazoos than violas, but because it could not have properly encapsulated my time at GU. Like my other performances on the Gonzaga stage, I improvised a few parts. Like everything else at GU, I couldn’t have done it without the support of my friends. Like every other momentous day, I forgot to shave my legs. Like every other assignment, I finished the speech the night before it was due. Like everything I’ve produced, I feel I could have done better, but graciously rest in the approval of the people whose opinions matter to me.

Like the pinnacle moment of a great film, the honor of giving this speech did not change my life. Rather this moment will stand as a fitting climax to one fantastic chapter. Sitting now in the denouement of that wonderful story, I don’t know what’s next. I could be diving into an action adventure flick, a romantic comedy or a buddy cop movie. Whatever it is, Gonzaga will never fade as a formative episode of this, my story.