Most of us face challenges in our work. Lots of ups and downs. Victories, setbacks, possibilities, frustrations and pressure, a lack of appreciation for what you do or the effort, finesse and skill required.

So this reflection is about struggle. We all have them, we all go through them.

What I would like to leave you with today is a suggestion: As you do struggle – whether in work, home or some other dimension of your life – know that being in and with the struggle is rich with benefits and blessings.

Rather than something to be avoided, struggle becomes an experience in and of itself to be valued. Many people have discovered their passion(s) as a result of struggle. We often dismiss these times as a “rough patch,” or “dark times,” but don’t miss the gift that comes with it.

Finishing What You Start 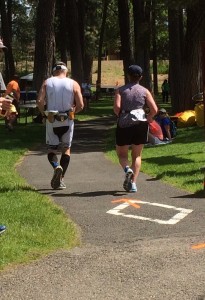 Though they both wanted to quit, Joe and a fellow runner finished the race.

On May 31, 2014, I was completing a triathlon that involved a 1.2-mile swim, a 56-mile bike ride and a 13-mile run. About half-way through the running portion, a woman named Mary, younger than I, came up from behind and asked if she could run with me. A number of times as we struggled forward, she shared that she was contemplating quitting. We were way in the back and the “Finish” signs, the water stations and the rest of the “rewards” awaiting the finishers were already being removed. I shared with Mary my own desire to be done with this, how the thought of quitting had crossed my mind, but also that rewards associated with not quitting in the midst of struggle were significant.

Mary and I eventually finished the race. The finish signs were gone. The post-race food had all been consumed. No one was announcing our names. No one was cheering at the finish line except a number of co-workers, friends and family members, cheering, calling my name and congratulating me. And I felt blessed.

A few days later, my wife drove me to Sacred Heart Medical Center for a surgery. As we drove, listening to Bruce Springsteen’s, “Dream Baby Dream,” I was thinking beyond the surgery, to the months ahead. My doctor and others told me that six months to a year was a normal recovery period for this type of cancer. IF they are able to get it all with the surgery.

CANCER! Hearing that word back in March stunned me. Suddenly I was old.  Sitting in my office, I thought of historical figures whom have become like companions for me.

Ernest Shackleton’s “Endurance” expedition of 1914 to 1916 tells how he led his crew of 27 men through ice packs, freezing cold and heavy seas to safety. He never achieved his goal of crossing the Antarctic on foot, but he was a hero to his men, and many of us who have come to be inspired by the story. In the end he felt blessed and his men were forever loyal.

Abraham Lincoln was a man whose battles with depression spurred him to examine the core of his soul; whose hard work to stay alive helped him develop a spirit of humble determination forged over decades of deep suffering and earnest longing – and in the end he became a great president.

Lesson from “A League of their Own”

Scene: Dottie Hinson decides to leave the team to go back to Oregon with her husband.
Manager Jimmy Dugan: Dottie, if you want to go back to Oregon and make a hundred babies, great, I’m in no position to tell anyone how to live. But sneaking out like this, quitting, you’ll regret it for the rest of your life. Baseball is what gets inside you. It’s what lights you up, you can’t deny that.
Dottie Hinson: It just got too hard.
Manager Jimmy Dugan: It’s supposed to be hard. If it wasn’t hard, everyone would do it. The hard… is what makes it great.

And so I decided that my experience with this disease would serve as means of demonstrating who I am: never the fastest or smartest or first, but someone who can endure.  I was reminded in that moment of an influential writer who has inspired me many times, Sr. Joan Chittester, who explores the connection between struggle and hope. She launches her discussion referencing the Old Testament story of Jacob wrestling with the Angel through the night and in the morning is blessed. The Angel tells him, “Your name shall no longer be Jacob, but Israel, because you have been strong against God, you shall prevail against men.” Chittester offers:

“If we give up in the midst of struggle, we never find out what the struggle would have given us in the end. If we decide to endure it to the end, we come out of it changed by the doing of it….It is not struggle that defeats us, it is our failure to struggle that depletes the human spirit….We not only can survive struggle but, it seems, we are meant to survive in new ways, with new insights, with new heart….The great secret of life is how to survive struggle without succumbing to it, how to bear struggle without being defeated by it, how to come out of great struggle better than when we found ourselves in the midst of it. Why? Because going on is what life is all about. Because there is no other choice. The only question is whether we go on in the full of ourselves, or live wounded and dour for the rest of our lives. One way is defeat; the other is hope…The essence of struggle is the decision to become new rather than simply to become older. It is the opportunity to grow either smaller or larger in the process.”   (Scarred by Struggle, Transformed by Hope, 2005, Joan Chittister)

Blessings in the Struggle

The night of June 4, and throughout the following weekend at the hospital was an experience in feeling blessed and overwhelmed. I never felt worthy of the blessings I received those days – of the unwarranted acts of kindness, graciousness and concern that I could only receive. I remember sitting in my bed and trying to think of how to repay people for how cared-for and cared-about I felt. I was familiar with the Book of Job and the theme of unearned suffering, but unearned loved was foreign to me. No words would suffice. No thank-you notes would do. Somehow I came to know the power of enduring, the gifts of struggle and the blessings of the human heart.

I close with the words of the Indian poet Tagore:

If thou speakest not I will fill my heart with thy silence and endure it.
I will keep still and wait like the night with starry vigil and its head bent low with patience.
The morning will surely come, the darkness will vanish, and thy voice pour down in golden streams breaking through the sky.

May each of us experience the blessings of struggle and grow greater in the process.