The Jesuits. In the most basic sense, they are a Catholic order established by Ignatius Loyola, called to serve the universal Church and the world. But for Jesuit priest, Father Matt Holland, S.J., they are so much more. They are a brotherhood, a family, bound together by vows of poverty, chastity and obedience not only to serve the Church and the world, but also to touch the lives of those who are marginalized or outcast.

A native of Seattle, ’04 Matt Holland did not always know he wanted to be a priest. He wrestled with the idea during high school at Bellarmine Preparatory School in Tacoma, unsure of whether to become a Jesuit or a teacher or both, or neither. What really helped Matt was the insight he gained from the Jesuits who taught at Bellarmine. The Jesuit mission to serve inspired Matt to continue his Jesuit education, and with the added benefit of financial aid, he attended Gonzaga to earn his bachelor’s degree in history. 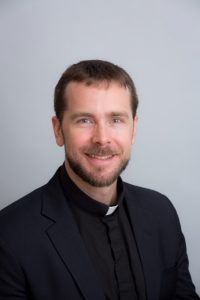 While at Gonzaga, Matt again struggled with the choice to become a Jesuit. He had a spiritual director on Gonzaga’s campus who helped him realize his choices, and a profound experience of God’s love spurred Matt to find a way to help other people feel this as well. When he entered the Jesuit Novitiate in Portland to begin training as a priest, Matt received confirmation that he was on the right path.

Fr. Holland now serves at St. Francis Xavier in Missoula, Montana, as a fully ordained Jesuit priest and lives in a Jesuit community with two other men. With a wide range of ages between the three of them, Fr. Holland gains insights from the different experiences of his fellow Jesuits. He finds this aspect especially enriching. Fr. Holland’s favorite part about living in a Jesuit community? The empowerment he feels from the support of his fellow Jesuits. He also enjoys the fact that bigger communities, such as one he was a part of in Bogotá, Colombia, offer a wider range of cultural aspects that help to broaden his horizons.

Now 35, Fr. Holland may not be the traditional illustration of a Catholic priest, mostly because of his age, but also because he did not enter the priesthood directly out of high school. Many of today’s older generations of Jesuits entered the Society of Jesus right out of World War II, when men were encouraged to join as soon as they finished high school or while in college.

Today, most young men who join the society do so after finishing an undergraduate degree, joining the workforce or both. In Father Holland’s case, he was able to attend Gonzaga and then teach and coach at Bellarmine Prep for a few years. Even so, he and Jesuits his age are still considered “young” compared to some of their fellow brothers.

Bridge for the Youth

As a priest from a younger generation, Fr. Holland sees himself as a bridge for the faith community. In past generations, one was expected to grow up in the parish and go to church every Sunday. “That’s just what you did,” he reflects. Today, young people want to be invited in and energized with ways that they can contribute their gifts and talents to the community. That’s something Fr. Holland strives to impart on this generation – the Church is inviting and is a space where people meet each other and find familiar faces that support one another.

One wonders, though, as society continues to change, will younger generations view ordination differently than older generations? Actually, Fr. Holland thinks not. Though times are changing and worldviews constantly shift, the call that priests feel is the same. All still feel a desire to share the love of God and the life of Christ with the world, especially through the Sacraments.

“Christ will find a way to show his love to the world and work to bring about the transformation of the world towards more peace and justice,” Fr. Holland expresses. “This part of faith won’t change.”

As Fr. Holland continues his faith journey as a Jesuit, he celebrates the gifts of both younger and older generations in fulfilling the Jesuit mission.