In 1974, while Spokane was hosting a world’s fair, Gonzaga was searching for a president who could dig the small school out of its tremendous debt. The man who would arrive to do that was Father Bernard Coughlin, S.J., a fundraising force of nature who believed that task was attainable through building relationships – not just with potential donors but with business and civic leaders alike.

Fr. Coughlin set about promoting a vision and mission for a strong, faith-based university. The rest is history. One needs only to stroll across campus to see the names of Fr. Coughlin’s many friends on our buildings, rooms and scholarships – Kennedy, Tilford, Jundt, Jepson, Burch, Herak, Magnuson, Hemmingson, Foley, Cowles, Rosauer, McCarthey, Clute, West, and soon-to-be Woldson – among others.

As we celebrated Fr. Coughlin’s 94th birthday in December, we honored him again for his enormous legacy of love.

Today, we’re setting the stage for a new legacy, one established not on the foundation of facilities but on the promise to provide a Gonzaga education for every eligible student who wants it. It is time to turn our attention to the growth of our endowment to ensure the ongoing success of this university into the future. Endowment gifts are lasting, far-sighted funds that permanently support the ways in which Gonzaga will unfold the potential that exists in every student. 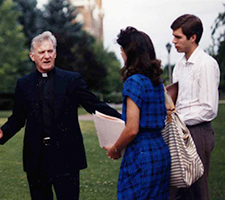 President Thayne M. McCulloh as a student with Father Coughlin

Since our public campaign efforts began a few years ago, we have received $73 million toward the Gonzaga Will capital campaign goal of $100 million dedicated to the growth of our endowment. Many schools across the nation consider an adequate endowment to be three times their annual operating revenue, placing Gonzaga on the dangerously low end when compared to peer institutions. Currently, our endowment supports only 2 percent of our operating budget, whereas other schools may have as much as 25 percent of operations supported by their endowments. Our finance officers and advisory team members believe that for the longevity of our institution, we need to grow the endowment support of the operating budget to allow us to respond more quickly to emerging needs and facility updates. Additionally, with the fragile state of higher education,  we know that our place at the table is uncertain when it comes to state budget funding.

We are on a trajectory that will create an endowment much healthier than we have ever had. Our goal is to provide a long-term annualized return equal to, or in excess of, annual spending plus inflation, because our endowment supports so many integral efforts, including:

A critical focus is on student scholarships because we know that receiving an education is a proven way to transition people from one life experience to new opportunities that would otherwise not be possible. Investing in education – particularly for those who could not aff ord it on their own – is a way we create lasting change in society. The impact of a scholarship gift goes so beyond the students receiving it, and reverberates into the communities where those young people are building small businesses or teaching children, working as Jesuit volunteers or creating new ways to address threats to the world’s economic, environmental and societal health.

I invite you to read the stories of students and families who have benefi ted from endowment-funded scholarships and then created their own (you can fi nd these on page 20). We believe our alumni and families can help us move to the next level of support to make a Gonzaga experience available for the next generation of Zags.

CHECK OUT OUR SPECIAL GONZAGA WILL section for more.