In my two years teaching, I had a desk thrown across my classroom, I had a student arrested, I called CPS too many times, I found suicide notes on more than one occasion, I would get emails in the morning that read, “Sorry I couldn’t do the homework I didn’t have a place to go last night.” And the anger, resentment and toughness of my students was often so intense that it was all you noticed.  Through my work, I was constantly reminded of what Jesuit Greg Boyle meant when he said:

“You stand with the belligerent, the surly and the badly behaved until bad behavior is recognized for the language that it is: the vocabulary of the deeply wounded and of those whose burdens are more than they can bear.” 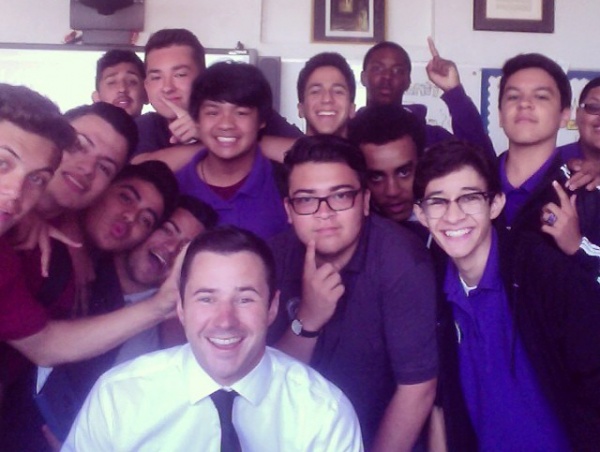 Tyler Hobbs (’12) with students from his English and History classes at Cathedral High School in Los Angeles. (2014)

And at 15, many of students bore burdens that to me seemed unimaginable.

“Peter,” for example, was an unruly sophomore in my English Language Arts class, 15 years old when I asked his class to write an autobiographical narrative paper. Tell me a story that is a part of you, I told them.

Peter wrote a story about his best friend, Marc. That past summer, Peter and Marc were playing basketball in his street, when Peter describes the following:

Moments later, we heard tires screeching and saw a car driving really fast down the street. I heard multiple gun shots and ran to a car for cover. When it was over, I turned to find Marc lying face down on the pavement. I thought he was playing and called his name repeatedly, but he was shot, and when I turned him over, was bleeding.

I called 911 and they came in about five minutes. I rode with him to the hospital until the doctors took him in. I waited for hours; they were the longest hours of my life. Finally, the doctors came out and told me the news: he had passed away. I was devastated. I cried my eyes out. I had lost my best friend.

On the first draft of this assignment, I failed Peter with a D-, coupled with a note that said, “Let’s talk.” By some miracle, Peter had managed to tell a profound story while still neglecting most every point on the rubric. After class, he sat down beside my desk.

Peter rambled for a good ten minutes, telling stories and paying compliments and smiling like I had never seen him smile. I told him that Marc seemed amazing and then I asked him, “Pete, what grade did you want on this paper?”

Inspired by author John Green, I used to tell students that we accept the version of ourselves we think we deserve. If we accept that we deserve amazing things, we should aspire to attain them.

I had done this with students before and though not popular, it proved highly effective.

No matter how much we pretend otherwise, I think that sometimes we just want to be reminded, or told for the first time, that we are worthy. Two weeks later, Peter turned in his revised paper to earn an A.

Desmond Tutu tells a parable – with which I am taking many liberties – about a village built along a river. One morning, villagers notice people – men, women, children – floating down the river, drowning. The villagers run to the riverbank and together start pulling the people out, one after another after another. This continues for hours and as villagers look upstream, there is no sign of stopping.

As people continue to float down, the villagers develop systems and procedures to most efficiently pull people out. But there are more people floating than helping and despite their every effort, they can’t catch everyone, and while many pass them by, still more approach.

The point of the parable, Tutu says, is that there comes a time when we have to stop pulling people out of the river, and go upstream to find out why they are falling in.

For the next year or two or three, you will be pulling people out of the river – doing service. And something profound can happen as you do this, I don’t know how describe it. Mother Teresa once said that we have forgotten we belong to one another. Maybe what happens in service is that we remember. And of course, as you do this, you will meet extraordinary people – those doing the work beside you, those you pull from the water – and eventually, if you do it right, it will sometimes be hard to distinguish who is ‘saving’ who.

But let me be clear: you are not the hero of this story. 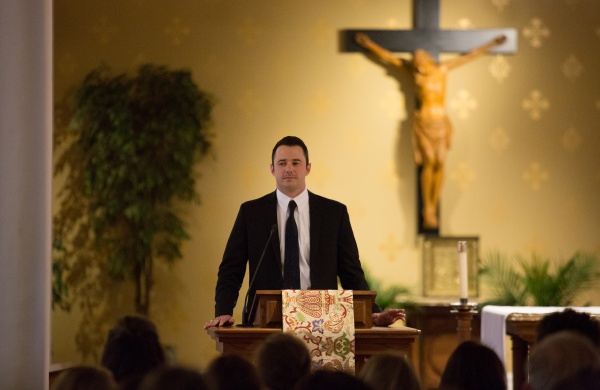 Tyler Hobbs (’12) – “Mother Teresa once said that we have forgotten we belong to one another. Maybe what happens in service is that we remember.”

But when you walk away, when your ‘term of service’ draws to a close, you will have a choice: to return to business as usual, to a place from where you can sit and watch people pulled, day after day, month after month, year after year from the river, from suffering, from neglect. And you can tell yourself that you once did your part.

Or, you can go upstream.

And justice will be hard, because what you find upstream will be likely be worse, because often you will find that people aren’t falling in, they are being pushed. And even worse, you might find that what is pushing them is the very thing from which you benefit, or that for which you voted, or that with which you associate yourself. And when this happens, there is often an inclination or temptation to pretend that’s not the case, to shy aware from the complex truths and often unfavorable realities. And should you still persist, it will grow more complicated, I assure you, and it will be or will become so politicized that you might forget why you went there in the first place. And there will be courage and cowardliness, great people putting their lives and careers on the line to ensure we see change, and others too afraid to do so.

So, yes, it is really hard, but that’s the point, isn’t it? Social justice is hard because social justice requires extraordinary courage and fierce self actualization. And it takes many forms, large and small. It takes courage to challenge a family member, to correct a coworker, to disagree with a supervisor, to hold up a sign, to share an article, to use your privilege such that you dismantle it.

And sometimes, you won’t know how to do it or how to do it well. I spend every day wondering if I’m doing it well or doing it at all. Every day I ask myself if I should get a PhD or start a new program or teach this differently. Am I doing harm? Am I asking the right questions? Am I a part of the problem? How can I do more? And let me assure you, there will be plenty of people quick to tell you, “You are doing enough.” But please do not ever settle for enough.

There are difficult, beautiful, God-filled things ahead. Look for them. And let the next year or two or three inform and shape the many that follow. Let service and justice be the foundation upon which you build your life. The rest will follow.

No luck is needed – learn everything you can, listen, love one another, get enough sleep, eat well, exercise, and you will be just fine.

And as Peter wrote in my yearbook, I will say to you: Thanks so much for being dope. 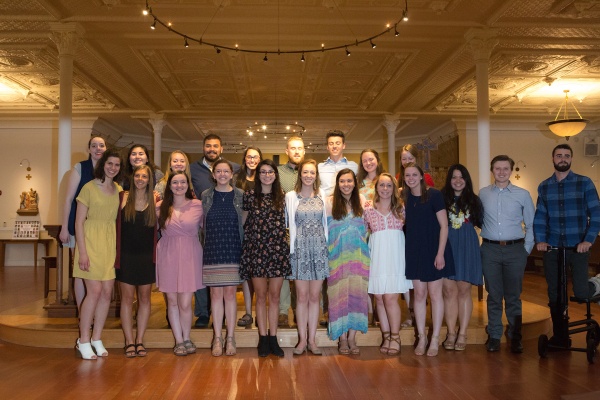