A hot, relentless sun beat down directly over the heads of the runners. On the horizon, Mile 21, fondly named Heartbreak Hill, emerged. Participants were carted off left and right, but the race continued. One of the runners, Lauren Zeutenhorst (’13), breathed in and out, channeling her strength, conquering the brutal Boston Marathon for the second year in a row. She was going to finish; she would prove that she could.

After graduating Gonzaga with a major in sport management and a double minor in sociology and English, Lauren Zeutenhorst wanted to pursue her master’s in higher education. A college visit on a particularly sunny spring day led to Zeutenhorst’s move to the East Coast and to Boston College.

It was serendipitous that a coast-to-coast move would land the passionate athlete in the host city of the oldest marathon in the U.S. It was nearly impossible to live in Boston and not catch “the [running] bug.”

Before she could even set foot on the starting line, though, Lauren started experiencing strange health concerns. Training for a Portland marathon, the humid Boston heat yielded extreme exhaustion, problems with her gait and numbness in her fingers and feet. Eventually, the symptoms faded away, and she ran the marathon with no problems. When warm weather returned, so did the symptoms. Zeutenhorst’s own research suggested multiple sclerosis, which a neurologist confirmed.

Despite the diagnosis of MS, an often disabling disease of the central nervous system, Lauren felt somewhat relieved. “The hardest part about having the symptoms was not having any answers,” she admits. Once Zeutenhorst had an answer, she decided to make the best of it. One way she did this was to confide in her former GU women’s club soccer teammate, Kelsey McLean (’14).

McLean was vibrant and fun-loving and also had MS. With what she describes as a conversation that she will carry with her the rest of her life, Zeutenhorst shared the news of her diagnosis to McLean before any of her other friends. “Kelsey told me that I could do it,” Zeutenhorst says. “Life didn’t have to change so dramatically.”

With a passionate and supportive friend at her side, Zeutenhorst felt as if she could conquer the world. Then, later that fall, McLean was killed in a car accident in Montana. Immediately, Zeutenhorst felt alone; her support system had been taken away.

After finishing her graduate degree in Boston, Zeutenhorst returned to the Northwest where she took a position as Central Washington University’s Director of Executive Events and Protocol. Even though Ellensburg did not offer a truly runner-friendly environment, Zeutenhorst still felt pulled toward the activity. She knew in her heart that someday she wanted to be on one of the biggest running stages of all – the Boston Marathon.

With doubts and fears, Zeutenhorst held back from entering, until one day in November of 2015 when she was handed a Dove chocolate with this message in the wrapper: “Because you can.”

“Right then and there, I thought of Kelsey and how she had told me that same thing – I took it as a sign.”

After months of training and fundraising for the Court Foundation, Zeutenhorst completed her first Boston Marathon in 2016, having raised $11,500 to aid in the research, education and financial assistance of people with neurological disorders, such as MS. Despite this accomplishment, Zeutenhorst had felt puny during her finish and knew she needed to run Boston one more time, finishing stronger. 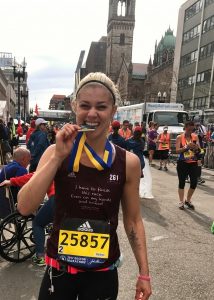 Zeutenhorst (’13) bites her medal at the Boston Marathon finish line.

Enter Kathrine Switzer and 261 Fearless, Inc. The famed first female runner of the Boston Marathon (now 70 years old) spoke at the Yakima Rotary Club in the spring of 2016, where Zeutenhorst was living. Switzer spoke about her experience running the Boston Marathon, as well as 261 Fearless, Inc. (261 for short), which establishes running clubs to empower women and provides a safe and secure global running community.

Zeutenhorst and Switzer chatted afterward. “What I loved most about Kathrine was that she was a genuine person,” she says. “She showed real enthusiasm for my decision to run Boston again.”

Switzer even told Zeutenhorst to keep in touch, so she began following 261 almost religiously. One day, the company’s website read, “Run Boston with Kathrine.” Zeutenhorst applied and almost immediately found out she made the team.

Staying in contact with her teammates, Zeutenhorst trained through the winter and into early spring. Along the way, she encountered several challenges: a knee injury, harsh winter conditions, pneumonia, demands of her busy life and the challenge to fundraise again.

“Running the Boston Marathon a second time is more challenging because you know what you’re in for,” admits Zeutenhorst.

Arguably one of the hardest marathons in the world, Boston’s features several hills late in the course, and unpredictable New England weather. The 2017 race featured high temperatures, with several people being carted off of the course for medical care.

During the race, Zeutenhorst kept pace with her goal. Then at the halfway point, she saw a friend from a running store she used to work at. Her friend struggled immensely, seemingly ready to pass out at any moment. In an act of selfless comradery, Zeutenhorst walked and jogged the last miles with her friend. He later told her that he would not have finished without her.

Zeutenhorst’s finishing time was 4:57. It was more than her goal, but she had conquered the Boston Marathon and helped someone else to do the same. 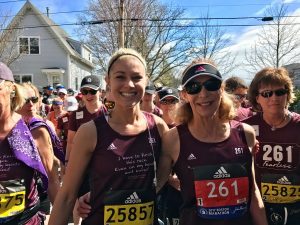 Losing a friend started Zeutenhorst on her path to conquering the Boston Marathon. Along the way, she found that she was capable of so much more than she ever thought possible. Kelsey encouraged Lauren to believe in herself, and Kathrine and the 261 team continued the support.

“I ran the Boston Marathon to prove that other people can do it to,” says Zeutenhorst. And through her journey, pushing past the struggles of MS and losing a dear friend, Lauren Zeutenhorst was able to prove it: Nothing is impossible.