In the short amount of time I have spent here, I have quickly learned that China is a land full of hidden gems. Of course, everyone knows about the unhidden gems: The Great Wall, The Forbidden Palace, the Shanghai skyline, and the jagged picturesque mountains that we see adorning the walls of our local Chinese restaurant back in America. But discovering the unheard of gems, the ones that not many people see, is where the real adventure begins.

For me, one of these hidden Chinese gems is the City of Xi’an, about a 6-hour train ride west of Beijing. I had not heard of this city before coming on this trip, but it is full of important history. Xi’an used to be the capital of ancient China, home to four different ruling dynasties, and the beginning of the famous Silk Road. It recently became a tourist destination because of the discovery of the Terracotta Warriors in a nearby rural area, where there are approximately 8,000 life-sized clay sculptures of warriors that were tasked with guarding the soul of Emperor Qin Shi Huang 2000 years ago and have since be buried, but remain relatively well preserved.

Despite the fact we are here for class credit and a large part of our responsibilities involve presentations and business-related activities, I have found that our free days are jam packed full of “street learning”. Simply going out and exploring the city on my own with only a map and a language barrier has taught me more about the city of Xi’an than a classroom could. I found myself lost more times than I could count, but walking around the city without knowing where you are, or frantically pointing to a spot on the map to your taxi driver who speaks another language is what makes this trip fun. After failing to hail a taxi early on in the morning, I walked over to the Wild Goose Pagoda, which is an ancient Buddhist Temple and holy site for Buddhists in China. Surrounded by tall office buildings and apartments, this park is a nice change of scenery that evokes a sense of peace amid a bustling city. The Pagoda itself is very tall and sits high above the monastery walls. Outside the walls are various statues that symbolize important Chinese virtues, as well as dancing water fountains, and vendors who are quick to entice tourists to buy their souvenirs. What stood out to me most about this place was the dedication it must have taken to build this Pagoda in ancient times, especially considering they did not have the technology or tools we have today to make structures like that possible, and yet here it still stands today.

After admiring the Pagoda and surrounding park, I headed downtown and into the “inner city” (inside the Xi’an wall), to walk down Art Street. This is the street where various artists and craftsmen come together to sell their figurines, paintings, sculptures, clothes, or whatever else they created. As I began to walk down the street, I noticed that a lot of the people sell the same things. For instance, there could be one old lady who has a paint brush shop, and right next door is another old lady that sells the exact same paint brushes. While it is interesting to walk in and see their products, you begin to look for shops that sell one-of-a-kind items. I found myself in one shop that sold a bunch of jewelry and small statues. After 20 minutes of charades between myself and the woman behind the counter, I managed to get a custom-made bracelet that will serve as a memento of this trip and of Xi’an in particular.

The culture of China is a lot different than the United States. I think that observation is fairly obvious and should go without saying, but you never truly realize how true it is until you experience it firsthand. As a group, we were lucky enough to talk about living and working in China with a local husband and wife Tim knows. Their names are Tiffany and Javad, and they have a unique background. Tiffany is from the United States and teaches English to university age students here in Xi’an. Javad is from Iran and has a Ph. D. in mechanical engineering where he teaches and occasionally consults businesses. They met here in Xi’an and have been in China for about 7 years. One of the biggest things they noticed about business in China is that the Chinese love to build relationships up before doing business. This typically involves going out to eat large dinners and ordering alcoholic beverages with their business partners or potential clients, all before actually discussing any business. In contrast, it is generally frowned upon to drink in front of clients or business partners in America. But the reason the Chinese do this is because they consider relationships to be very important. They refer to it as “guanxi”, which means connections or as we would probably refer to it in America as networking. In Tiffany and Javad’s experience, laws may exist in China, but it really comes down to who you know, because laws can be bent in some instances. To illustrate, Tiffany told us a story about her first pregnancy, in which the school she was teaching at wanted to release her because the maternity leave she needed would have been too much for the University. Eventually, she negotiated a favorable deal to keep her job and extend her paid time off to care for her newborn, and that was all because of the people she knew within the University, as well as her knowledge of the Chinese laws.

For someone like myself, who grew up entirely in the United States and had never been out of the country before this trip, hearing stories from people like Tiffany and Javad, or exploring a foreign city all alone are unique ways to learn about a new place like China. We are only 11 days into this trip and I feel like I have learned so much about China already. I cannot begin to imagine where else this adventure will lead, but I am extremely excited to see what the future holds for this trip. As Javad and Tiffany said: China is addictive. Once you come to China, you want to keep coming back to see what other hidden gems it holds! 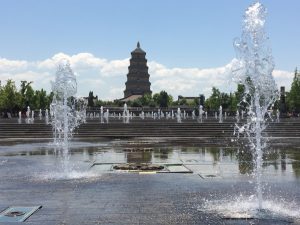 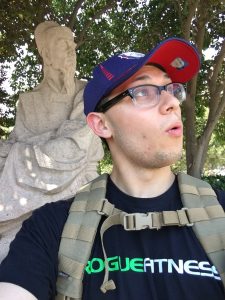