Shanghai is our last city on our China adventure. They say Shanghai is the city where the West meets the East, alluding to its first-class skyline and western cultural influences such as large shopping malls filled with designer stores, and yet the city still feels very Chinese. Getting in last night, driving through the city full of buildings that flash with LED lights, was a refreshing contrast from the quieter area of Ningbo that we found ourselves in a day before. Today was simultaneously our first full day in Shanghai and also our free day, and it surely was packed with things to do. Shanghai is a huge city, and you could probably spend a month here and still not run out of things to do. But from everyone we have talked to, three things that we must do include: the underground markets, Yuyan Gardens, and Shanghai Tower. So that is what we did.

Shanghai’s metro system is really easy. There are lines that can take you all over the city, and knowing where you are and where you are going is pretty easy. A group of us wanted to make our way to the underground market in the morning, so we got a location of where we thought it was and made our way to the nearest metro station, buying an all-pass metro pass for a mere 18 yuan. After about 30 minutes of traveling, we found ourselves in a district southwest outside Shanghai. It did not take us long to realize we did not have the right location, and when we finally did find the correct location, we all hopped in taxis and drove to the underground markets.

The markets themselves were interesting. On the ground level, you see a beautiful park with unique art and the architecture of the Science and Technology Museum, which the markets reside under, is a reflection of Shanghai’s modernity. Underground, is a whole new world. The air is hot and stuffy. The shops are packed tight and close together. Merchandise is everywhere and if you are not bartering with a very persistent salesperson, you are probably walking by a designer bag, jewelry, or sports jersey store. Bartering is the name of the game here, because there are no price tags. I noticed that the salespeople liked to ask where I was from, probably in an effort to develop a relationship with me and (more importantly) to gauge how much money I had in my wallet. More often than not, my name was Matt and I was from Canada on holiday. Seeing all the merchandise, although presumably fake, was still fun to shop around for. And if you are like me and get a kick out of bartering, this is the place for you. I personally had a lot of fun trying out different bartering strategies, and also watching my friends barter in their own unique ways. My biggest piece of advice to anyone who goes to these markets would be this: always be willing to walk away. Firstly, if you show them that you really want that fake Kate Spade handbag, they have the advantage and are going to charge you a lot for it. Second, I have found that whenever people start walking out of the store, the salespeople get desperate and usually come down to your price point. Finally, even if you do not make a deal, I guarantee you can find that exact same LeBron James jersey a few stores down.

Bartering sure works up an appetite, so we decided to make our way to Yuyan Gardens which is a preservation of Old Shanghai with traditional Chinese architecture and great dumplings. I certainly got the sense that this was a large tourist destination, mostly due to the many shops that sold the same trinkets and souvenirs that we have been seeing this entire trip in China, but also with the crowds of foreigners that were buying them. Luckily, one of the guys in our group knew of a local dumpling place that was unknown to most tourists, and so that is where we ate lunch. We knew this was an authentic place because no one spoke English and the menu was completely in Mandarin. As expected, the dumplings were filling, which was needed for our next journey: a trip up the second tallest building in the world, Shanghai Tower.

Rising 2,023 feet in the air, this megatall building is one of the most prominent buildings in the Shanghai skyline. Not only is it the tallest thing in the city, but the building’s architecture beautifully twists up in a spiral and slowly tapers down into a thin crown on the top. It is even cooler at night, where the entire building is lit up with LED lights that writes out messages which can be seen from all over the city. The cost for students to go up to the top was 120 yuan, which was acceptable for us. To get to the top, you take the fastest elevator in the world, which gets you up 128 stories in less than 30 seconds. The viewing deck provides 360 views of the city, and we stayed until the sun went down, taking pictures and reflecting on how amazing vast the Shanghai economic area is.

From our free day today, we learned that there is a ton to do in Shanghai, and one day is not enough to see it all. My advice to anyone traveling in Shanghai is to use the metro system because it is really easy and quick. But also, be sure you are going to the right place or you may find yourself on the opposite end of the city. The underground markets are a fun opportunity to try out your bartering skills as well as get gifts for friends and family back at home. The Yuyan Gardens is a nice throwback to Old Shanghai that is full of food and touristy things to do.  And finally, the Shanghai tower is definitely something that cannot be missed if you have a free day in Shanghai. I look forward to visiting some of the businesses that call this city home in the upcoming days. 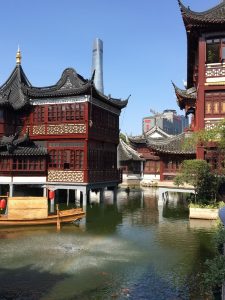 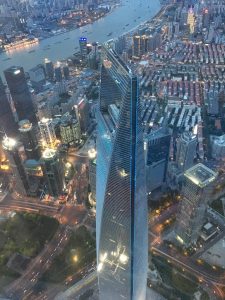 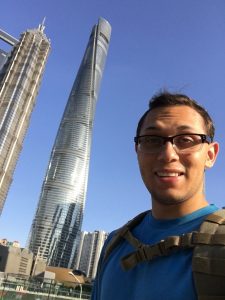 A fruitful visit to Shanghai