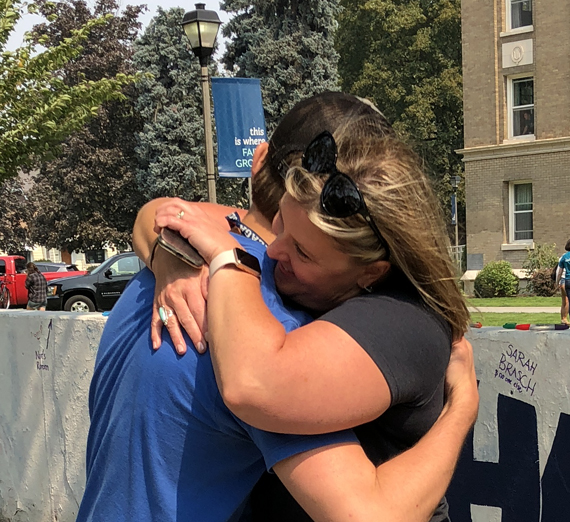 I haven’t been riding my bike as often as I used to. There was a time when I rode a lot more—I did a half IRONMAN once, if that tells you how much I rode—but now I’m recovering from foot surgery and am taking it slow (as slow as the mother of two teenage boys can). With my oldest son preparing to leave home for college soon, I needed some time on two wheels last weekend, just to think.

As I rode Saturday morning, I was overcome with emotion. It’s an easy thing to feel right now. My first-born, introverted son is getting ready to start his first year at Gonzaga. I have scars on my feet and sometimes it feels like they’re on my heart too, as I’ve watched my babies grow into young men with my loving husband by my side. Some days, it’s poetic. Some days, it’s chaos. Every day, I am grateful.  And that’s the emotion that washed with the wind over me.

Later, my family had loaded into the car to drop our son off at GU for his Gonzaga Outdoors Out-of-Bounds (GOOB) pre-orientation trip. It’d been a hard few weeks convincing him to go. I prayed and prayed that everything would be okay. Like I mentioned before, he’s a fairly introverted guy and initiating connections with new people has always been a challenge.  But we knew that at such a major transition in his life, opportunities to connect would be critical to his success. So, there was some underlying worry in my heart as we rode toward campus.

“Mom? Dad?” our son broke the silence in the car.

“I just wanted you to know that you’ve been really great parents. Like, all a kid could ask for.”

I beamed and thanked him. I didn’t cry, even though everything about that moment said that I should. Instead, I felt serenity. Like a hand on my shoulder as if to say, “you’ve done good, Mama.”

With a mild haze of smoke in the sky, we parked the car and then walked over to the field between the Rosauer School of Education and the Hemmingson Center, where our son got checked in for GOOB. He’d warned us a few days earlier about how he wanted this exchange to go.

“Just please, don’t make a big deal about it,” he said in typical teenage leave-me-alone style, “and don’t take a whole lot of pictures.”

I thought back to that request as he signed in and got his backpack. A GOOB student-leader approached.

“You with GOOB?” the leader asked.

“Get some food and meet at the bulldog on Mulligan field at noon.”

My husband and I noticed that there weren’t as many parents around. Not sure if our son wanted us there anymore, we asked if he’d like to get a snack with us at Starbucks before we left. He agreed. Before we could walk into the Hemmingson Center, a young lady popped up alongside my son.

And then she extended her hand right in front of my otherwise shy son.

“My name is Ashley,” she declared. “I’m from Colorado and I came in yesterday. Last night I stayed with some friends.” She was brave, but I could hear a hint of nervousness as her voice shook. “Are you guys going to get food?”

She only ordered ice water and sat down with our family. Knowing my son’s propensity to avoid small-talk, I modeled for him.

“What’s your major?” I asked Ashley.

“Philosophy and pre-med,” she responded.

My son’s interest was piqued.

“Yeah! What’s your major?” she asked him.

“Electrical engineering, but I think I’m going to minor in philosophy.”

The spark in my son’s eyes was visible as a conversation kicked off about who’s whose favorite philosopher and which theories and books on the subject each of them liked best.  They kept talking, and we learned that Ashley rock-climbs and that her parents are doctors.  When asked why she chose GU, Ashley said,

“I looked around and checked out a bunch of schools and found that all the smart people go to Gonzaga!”

I couldn’t help but smile. Just like the wind washed a feeling of gratitude over me during my bike ride, I felt a sense of warmth and peace envelop me.

Ashley pointed out that my son had a backpack and she didn’t. She’d missed that part of check-in. Against every instinct that I had to wrap my son in my arms, give him a kiss, walk him out to the meeting place like I did on his first day of kindergarten and every year after, I instead pointed to the door and said, “You two go. Go get Ashley her backpack and you have fun.”

Off they went. I pushed my baby bird out of the nest. And it felt good.

We watched as students filtered onto the field. Ashley and our son sat beside each other and then more students came and sat beside them. Before we knew it, our son was surrounded by people and he was talking to them all.  Not long after that, we watched other parents drop off their students. We saw a mother crying. We saw another mother drop her daughter off and then walk inside near us, looking through the window at all the other “birds” on the field.

“Would you like to join us?” I asked, channeling Ashley’s friendly example.

“Would I ever!” she exclaimed. And then I made a new friend.

We bonded over our shared experiences as Gonzaga parents, watching our children out there on their own, with only each other, grasping for trust, independence, and a deeper purpose.

Through my career raising money for scholarships at GU, I’ve met with a lot of parents who have gone through the same roller-coaster of emotions that I was experiencing — but I didn’t fully understand it until that moment. You see, it’s never about the money. It’s about people like Ashley. It’s about our sons and daughters and the support we can give them by bringing the people they need most here: each other. There are miracles happening on the Gonzaga campus every day, and they’re happening because people like you and I, who are enchanted by the good they see here and believe in the future give gifts for other people’s children.

On the day I dropped off my son, I went home and told my story to my best friend.

“God gave you a gift today,” she said.