Last night was the first night that we stayed at the Crowne Plaza, and so we got to experience the wonderful breakfast here this morning! This breakfast buffet was delicious and it had the best authentic Chinese food yet, so it was a great start to the day.

Next, we boarded the bus and drove to a location for our Microsoft visit.  We actually met at a shared location between the Chinese government, Microsoft, and a company called Makeblock.  The office space had new and old Microsoft products that we were able to try out, including a smart board, laptops, and virtual reality goggles.  After we looked around for a bit, we went inside a meeting room to learn about why Microsoft chose to operate in Shenzhen, as well as to learn more Microsoft as a company.

Microsoft had many different speakers present to discuss different aspects of their company and production.  Cindy Liu, manager of the sales team, spoke about why it is important for Microsoft to be present in Shenzhen.  She informed us that one of the major reasons is that Shenzhen has an astounding number of exports and imports.  The second reason is that Shenzhen has the highest concentration of billionaires in the world, who are mostly people that started startup companies that became very successful.   Microsoft wants to establish relationships with these entrepreneurs, in order to hopefully be a part of both their companies and their success. Finally, the third strategic reason that Microsoft is in Shenzhen is the speed that things are able to happen in the city.  Typically, in Shenzhen, the cycle of a product from conception to production is only three short months, compared to the typical 9 month cycle everywhere else.  Cindy’s presentation gave me a much better idea about both Shenzhen as a city, as well as the places that Microsoft wants to be a part of.  Since I am from the Seattle area, I have been around Microsoft my entire life, and perhaps Microsoft has kept its campus in the Seattle area, Redmond, in order to be a part of the entrepreneurial spirit of Seattle as well.  Today I learned that companies have offices in strategic places, in order to match the goal of the company.

Other speakers presented to us about Microsoft’s latest strategies and expectations for the future.  Since the PC market is not growing much anymore, Microsoft has been focusing on its Business Development, and areas such as the Internet of Things and Artificial Intelligence.  For example, as I mentioned earlier, the space that we were in was shared between the government, Microsoft, and a company called Makeblock.  Microsoft wanted to be partners and work with Makeblock because it included the aspect of artificial intelligence.  Makeblock strives to help children learn programming at an early age.  In short, Microsoft wants to continue expanding its markets, since it already reached its original goal of every desk having a computer.  Microsoft’s current goal, according to Ken Huang, HR manager of Microsoft, is to empower everyone to achieve more.  This is a good mission statement for Microsoft because it is very broad, has no limit, and enables Microsoft to ultimately change the world for the better.

The Microsoft employees also gave us updates about the Windows 10 Update and other exciting projects that they are working on.  The Windows 10 Update allows users to unlock their computer with a facial recognition software instead of the use of a password. This update also includes 3D features, gaming security, and a Microsoft edge input.  Next, Mr. Mingjie Wang spoke about the Microsoft Asia Center for Hardware and innovations that are happening with accessories.  He stated the fact that every 2 seconds, someone buys an accessory in the world.  Accessories for things such as tablets and laptops are a rapidly growing market, which is continuing to become more advanced as well.  For example, the first mouse was invented 33 years ago, and has since undergone 50 innovations.  Microsoft has been the first company to market on many of these innovations.  These innovations are coming at a much faster rate than they were before.  In the past, products were planned three to five years ahead of time before they went to market.  Now, according to Microsoft, products only are planned for about 1 year before they are being sold, due to the amount of competition and speed in the market.  This type of speed will be present, and possibly even faster, when I am in the workforce, so I will need to be prepared to deal with this type of situation.

After getting this background information about Microsoft, we had a lunch break and then headed to the factory for a tour.  We went to the Emdoor factory, which is a partner of Microsoft.  Emdoor creates and ships 8 million tablets per year, and has 500 workers in the factory with 5 production lines. Before entering the factory, we had to put on a poncho, hat, and even go though an air shower to ensure that we were not bringing any unwanted dust into the factory.  The factory was fascinating to see, because I had no previous knowledge of how laptops/tablets are made, and I had also never experienced a working assembly line before.  It was amazing to see the amount of work and raw materials that go into creating a piece of technology that many people take for granted.  Also, during multiple times in the process, the products are tested to ensure that they are working properly, and at the end they endure quality control procedures.  Emdoor puts an enormous amount of work and thought into creating the fastest and most efficient assembly line possible.   This parallels the efforts of many businesses in order to keep costs low and revenues high.  After the factory tour, we boarded the bus and drove to the technology market.

The technology market in Shenzhen is a group of 5 large mall-like buildings, which all sell electronic parts. Many of the people shopping at these stores are entrepreneurs who are looking to create devices in the cheapest way possible and then sell them to other people.  It is custom to barter at these booths in order to get the cheapest price possible.  The technology market was a bit of an overwhelming experience, because there were so many booths, people, and items for sale in a small amount of space.  We were given some free time to walk around the market in smaller groups, and I purchased a pair of headphones and was able to barter the price down to a reasonable amount.

After walking around the technology market, we went to dinner as a group to a restaurant called Green Tea.  The food was absolutely delicious and pretty traditional Chinese food.  I tried everything, even the shrimp that did not have their heads removed.  I definitely hope to go back to Green Tea at another point on the trip, because it was delicious. 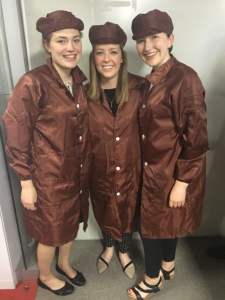 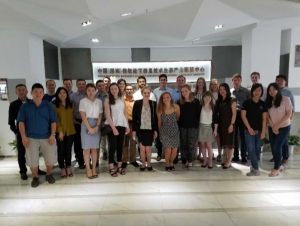 The Group at the Alliance Center 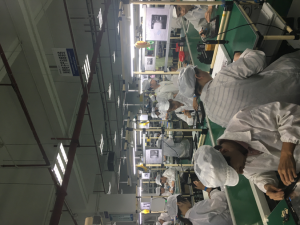 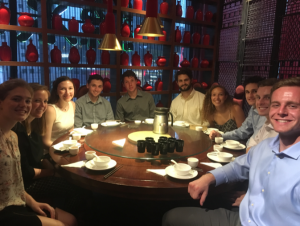