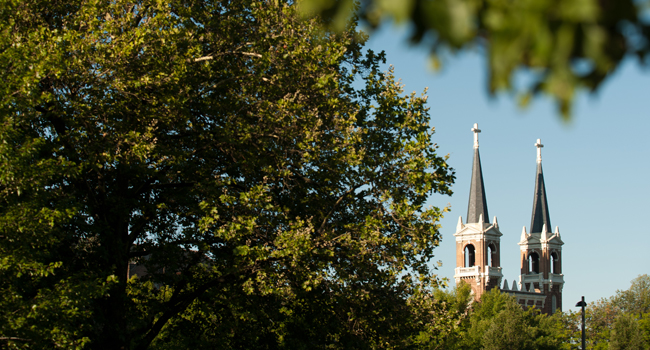 The world is full of mysteries…like the current whereabouts of the Loch Ness Monster or the truth behind the legend of the Bermuda Triangle. But for Zags, perhaps nothing remains more elusive than defining what makes the Gonzaga “community” so distinctive.

Ask anyone on campus what makes Gonzaga so special, and you’ll likely hear something about “community.” Push a little more, and you’ll hear about folks holding open the door for one another (for an absurdly long time), or graciously pausing to give directions, or sharing a smile and a wave with complete strangers. Try to probe deeper, however, and you’ll find that we get a bit tongue-tied. When you boil it all down, what is the secret, special ingredient of Gonzaga’s community?

I imagine the first Jesuits struggled with this same question when it came to defining the uniqueness of their way of life. One of the earliest companions, Fr. Nadal, said the key to understanding the lifeblood of the Jesuits is Ignatius Loyola (their founder). His experiences, reflections, ministry and leadership exemplify the dynamics and characteristics of the Jesuit vision and practice. No person’s life is easily summed up, but over the years, we’ve developed ways of describing Ignatius’ legacy and what it means to be “Jesuit.” It’s my belief that this Jesuit identify infuses the culture and shapes the uniqueness of Gonzaga’s “community.” These are just some of the elements of our Jesuit heritage that I see brought to life in the Gonzaga Community:

Intention: When Ignatius and the earliest Jesuit companions were forming their religious order, they composed the Jesuit Constitutions, a series of guidelines governing Jesuit life and work. In summary, James Martin, S.J. says, “…the Constitutions are about how to live your life with others.” Ignatius spent the years leading up to his death continuing to refine this document because he took nothing for granted about how Jesuits were to live in community. This same intention comes to life in the way Gonzaga encourages and teaches students to build community with one another. From Orientation to Residence Hall communities; academic fraternities to tutoring and advising; clubs, student government and community engagement to retreats, small groups and prayer (and so on); we strive together to create a dynamic living and learning community.

Cura Personalis: This Latin phrase means “care for the [individual] person,” and traces of it can be found throughout Ignatian spirituality and the Jesuit way. Whether Ignatius was instructing a Spiritual Director, a Jesuit Superior, or a professor, he encouraged them to use discretion and judgment in caring for the person before them. In one case, Ignatius wrote: “If something else is expedient for an individual, the superior will consider the matter with prudence and may grant an exemption.” This kind of other-centeredness, consideration for a person’s context, profound care for the other’s growth and wellbeing, and willingness to adjust in order to achieve the common goal, is deeply rooted in Gonzaga’s collective character.

Contemplation in Action: This phrase is often used as one way of summing up Ignatian spirituality, or in commenting on the intended outcome for the graduate of a Jesuit school. It speaks to the creative tension in a life filled with quiet reflection and prayer as well as purposeful action. It’s about self-awareness, coupled with alertness to the reality of the world and God’s action and presence within it. I observe a hunger for understanding in the Gonzaga community that goes even beyond academic knowledge, as well as reflection and discernment on both the individual and communal level about who we are called to be and how we are prompted to share our gifts and talents generously with others. This search for meaning, purpose and call makes our community bigger than itself.

Pursuit of Justice: Fr. Pedro Arrupe, S.J., a former General of the Society of Jesus, said, “Today our prime educational objective must be to form men-and-women-for-others…people who cannot even conceive of love of God which does not include love for the least of their neighbors…” Members of Jesuit institutions are encouraged to cultivate a well-educated solidarity with others and the habits of mind and heart necessary to bring about social transformation for the common good. At Gonzaga, our notion of community is not simply one of friendship but one of justice, and it extends well beyond the borders of campus…to the greater Spokane area and even across the globe.

So, is there a single, straight-forward answer to what makes Gonzaga’s community so exceptional? I fear the answer is probably no. But these clues from our Jesuit history point toward how we have established what Ignatius would call Gonzaga’s “way of proceeding”—all the many values, attitudes and behaviors that lead to a rare and special kind of community. One that’s just a bit mysterious, too.