While the Gonzaga University men’s and women’s basketball success is well known, the University also celebrates the success of its five club sport teams that have advanced to national competitions in tennis, basketball and volleyball. 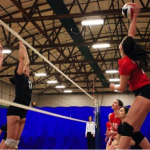 The Gonzaga student-athletes who compete in nearly 20 club sports – most of which rank at or near the top of their league – work tirelessly to balance their schoolwork with numerous weekly practices, travel, and countless fundraising efforts. Supported largely by student dues and generous benefaction, Gonzaga’s club sport student-athletes excel in athletics, academics and gain valuable experience in leadership and innovation.

“Congratulations to these and our other student-athletes as they continue to prove themselves among the nation’s best,” said J. Tyler Hobbs, program coordinator with Gonzaga’s student development division.